What Is a Drapery Header? (Tips From the Workroom)

Draperies can be customized with endless options. Just take a look at the tens of thousands of fabrics that distributors are carefully putting together into sample books every year and you may feel overwhelmed by all the choices. But the drapery header is also a major way to make a drapery more customized.

So what is a drapery header? The term refers to how a drapery is sewn and hung on top. The most basic draperies typically have a rod pocket or flat panel header. Pleated draperies are also common, although they require more built-in fullness. There are also some other unique headers that a custom workroom can create and may include attached valances, contrast fabric, trims, and other details.

Let’s talk about each of these examples to inspire your own drapery design.

As I said, the rod pocket is the most basic style of drapery. This style is popular for two reasons.

First, a rod pocket takes less time to sew than some of the other styles available, so this style is very budget-friendly when it comes to workroom labor cost. Second, the style naturally covers more width (meaning that it requires less fullness), so a 50-inch rod pocket drapery will be able to cover a wider window than a pleated drapery made in the same size and in the same fabric.

The downside to a rod pocket header is that it’s best for decorative draperies (stationary) only. If you’d like draperies that can easily slide to open and close, there are better options than the rod pocket style. As a general rule, the diameter of the drapery rod should be about half of the rod pocket size, or slightly less.

For example, a 4-inch rod pocket would work best with a 2-inch round diameter drapery rod or slightly smaller. 3-inch rod pocket drapery with a 1-3/8-inch round drapery rod. Some rod pocket draperies have a double header that allows a ruffle to be created naturally once the drapery is gathered.

You may have seen grommet panels, which are also known as eyelet draperies. This is a welcome and more modern upgrade to the rod pocket style. There are also other styles that are hung without grommets, using drapery rings. When this style is unpleated, it’s known as a flat panel drapery. One common mistake homeowners make with grommet and flat panel drapes is to try to adjust a 50-inch wide panel like they would with a rod pocket draperies. Keep in mind – once you get away from a rod pocket header, a drapery will require more built-in fullness to cover the same area on the window and wall.

While a 50-inch drapery may be able to cover about 25 inches of width as a rod pocket, you may notice that the same drapery can only cover about 15 inches of width once it’s converted to a grommet or flat panel top. (You can use this guide and calculator to figure out how much fullness your drapery needs to have.)

There are many pleated styles, it can sometimes be hard to choose. Most pleated draperies are hung on drapery rings. So, a pinch pleat drape may look like this from the front… …and like this from the back (notice the use of pins to hide the hardware).

The metal pins you see here can be adjusted so that the drapery is hung on a traverse rod, like one in light gold above. Notice that drapery rings aren’t necessary with a traverse rod. Another example of a pinch pleat drapes on traverse rods.

Of course, there are more pleat header styles than just the pinch pleat drapes. Here are more styles to consider. The same style, up close.

Draperies can also be hung from tabs and ties, which require about the same fullness as pleated draperies do. This silk drapery was pleated first, then hung from wrought iron knobs by tabs. The same style as above, this time in a modern geometric fabric in spring green. Tie top draperies, made with cuffs in contrast fabric in green.

Some specialty custom draperies can be made with attached valances. Let’s take a look at some examples. 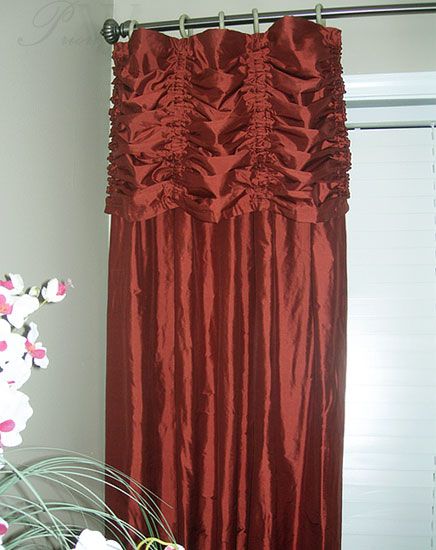 A bustle swag is also a common addition to a drapery, especially in formal rooms. Besides using a drapery rod and knobs, a drapery can also be board-mounted. Here, both the brown valance and double wide yellow drape were attached on a wooden board.

Next, shop our custom draperies and find the fabric that works for you.