A striped window shade is a great way to dress your window if you want to control for privacy or light. But did you know that there are literally dozens upon dozens of styles available when it comes to fabric shades? The style is so versatile and so open to creativity when it comes to its design that an entire book could be written about this type of window treatment.

But for now, I’d like to share with you a blog post about some of the fabric shades most commonly seen in homes. And I’ll use a lot of pictures of striped shades to make this point.

Most fabric shades out there have vertical stripes. This is partly because of the limitation of 54-inch widths that fabric manufacturers have established when it comes to home decor fabrics. But for homeowners, the benefit is that vertical stripes create the illusion of height and make the ceiling appear higher.

Horizontal stripes, especially when they’re wide prints in contrasting colors like black and white or dark colors, can have the opposite effect. You have the choice of fabrics with either vertical or horizontal stripes for your custom window shade. Just know that horizontal stripes are best in open and bright spaces with high ceilings.

As I’ve mentioned, there are many types of fabric shades and almost endless ways to add accents and customize them. Rather than take on this large task, I’d like to simplify it by explaining the window shades that my clients request most commonly for their custom projects.

These fabric shades have rings in the back just like any other shade, but there is nothing in between to prop them up as they’re drawn up or down. This is done intentionally to create its relaxed shape. Notice in the pictures below how the folds generously fall in the center. Vertical stripes in gold and ivory were used for the relaxed shade in a living room. Extra wide draperies were then layered over the shade. The breakfast area of this transitional kitchen has a window with three curved sections. The space needed a window treatment to fit this wide window and to continue the coastal theme of the kitchen. Relaxed Roman shades with a single center stripe in a sand color were used for each section. Not clearly visible in this picture, but the patio door also used another relaxed Roman shade as an inside mount.

PROS OF A RELAXED ROMAN SHADE:

CONS OF A RELAXED ROMAN SHADE:

Unlike the relaxed shades above, these shades have a bit more structure when drawn up. The structure mainly comes from covered wood slats or bars that are sewn into each shade. For the sake of simplicity, I will refer to them as slats from now on. The difference between the two styles is defined by how each shade looks when fully extended. With the hobbled shades, these slats are hidden in the back and covered by excess fabric.

This allows for natural folds to be created even when the shade is in a relaxed position. The hobbled shade is also sometimes referred to as the waterfall shade. Flat shades are exactly that when in their relaxed form. The different sections formed by each slat are still clearly visible, but overall the shade is flat when viewed from the side. A bright and open kitchen with white shaker cabinets was kept simple with a scroll stripe shade in white and stone colors. With the white backsplash, white walls and white marble countertops, the color of the shade was a perfect fit. Flat shades are great for modern kitchens. They’re fully functional, yet simple enough to work with the minimalist style. White is a common color choice. To make sure the fabric shade doesn’t get lost in a sea of white though, banding is commonly chosen on its edges to frame it. Here we see a wide band in mushroom gray used on two slatted shades on corner windows. As you can see from the corner windows above, a fabric shade is a great space saver. In this home office, a window with built-in seating needed to be dressed. Two fabric shades in yellow and brown stripes were installed next to each other on the double window. Gold tassels adorned each shade to complete the look.

There’s one thing I want to address when it comes to fabric shades that’s very important… Window shades can be installed in three ways:

Most of the ideas we’ve seen so far were of outside mounts, but let’s see how mounting a shade inside the window frame might look. In our second example of a home office with a double wide window, we see a few subtle differences. Besides the obvious fact that in this room bold and colorful stripes were chosen, notice how the designer didn’t want to cover the beautiful mahogany window frame and cornice above it. The solution was to install the shade as an inside mount.

Even though the window is a double wide window, in this case, a single extra-wide shade was chosen rather than breaking up each window section as we saw in the example above. I loved this shade so much, I simply had to create a close-up to show it (even though it’s almost identical to the picture above). Here, a wide wood frame in white was kept as a focal point in a master bathroom. A simple shade in sage and green stripes was chosen as a window treatment above a free-standing bathtub. There are quite a few ways to spruce up a window shade. It’s commonly done to bring together the overall color scheme in a room. But it can also be done to make the shade more traditional. The silk shade above used gold accents to make it a bit more luxurious. The sides were framed in mini box pleat trim, while tassel fringe was added to the bottom hem.

The designer decided to take care of all sides of the shade so to speak and added a wood cornice in a dark stain to cap off the top of the window shade.

PROS OF A FLAT OR HOBBLED ROMAN SHADE:

CONS OF A FLAT OR HOBBLED ROMAN SHADE:

Technically, I shouldn’t even include faux shades in this repertoire of pictures.

After all, window shades are supposed to be fully functional. In other words, you’re supposed to be able to draw them up or down. A faux shade only mimics the look of a window shade but is stationary, like the faux shade valances found here. It’s technically a valance that looks like a shade. But the reason I chose to include them is because they’re becoming more and more popular.

Many homeowners like the way a fabric shade looks but don’t need to constantly pull it up or down. It makes sense to only create a valance for those who are on a budget and don’t want to pay for a functional shade. A whimsical faux shade valance was created in a modern kitchen for a narrow window. This is the beauty of custom valances – they can be made even for narrow windows like this. Because of the espresso stain cabinets and camouflage green backsplash, it was important to brighten up a space that could quickly become too dark. That’s why a solid white fabric was chosen. An open concept living, dining and kitchen trio needed a uniform window treatment to bring the space together. The single windows around the fireplace and sliding glass door in the dining area were each dressed with a faux shade with black, gray and white stripes. A narrow window in a Tuscan kitchen was dressed with a faux shade using a silk with green and brown stripes.

PROS OF A FAUX SHADE:

CONS OF A FAUX SHADE:

Oh, the balloon shade. It makes a statement in any room with its luscious volume and heavy use of fabrics. Let’s take a look at some examples… In this traditional bathroom, the goal was to embrace the unique nook that the garden tub created and to make it a cozy and private area. Balloon shades are a great solution here. Not only do they fit right in with the rest of the luxury in a traditional master bath, but their excessive use of fabrics allows for extra length. This, in turn, translates into privacy that’s desperately needed for windows above bathtubs. Now, there is a subtle way to modernize a balloon shade. It’s to introduce inverted box pleats rather than just gathering the shade entirely. This makes the top of the valance look sleek and tailored and also sets each of the poufs apart to form on their own. We see that example used on this long balloon shade in gold. When we look closer at the triple wide window that’s in the same room, we see how each of the poufs formed in between each of the pleats. It doesn’t stop there. The balloon shade is truly versatile enough to be used in any room in a house. This country kitchen with its farm sink had a triple window that needed to continue the country style in the kitchen without obstructing the beautiful view. Each of the three balloon shades was installed as an inside mount. Talk about solving so many problems all at once! 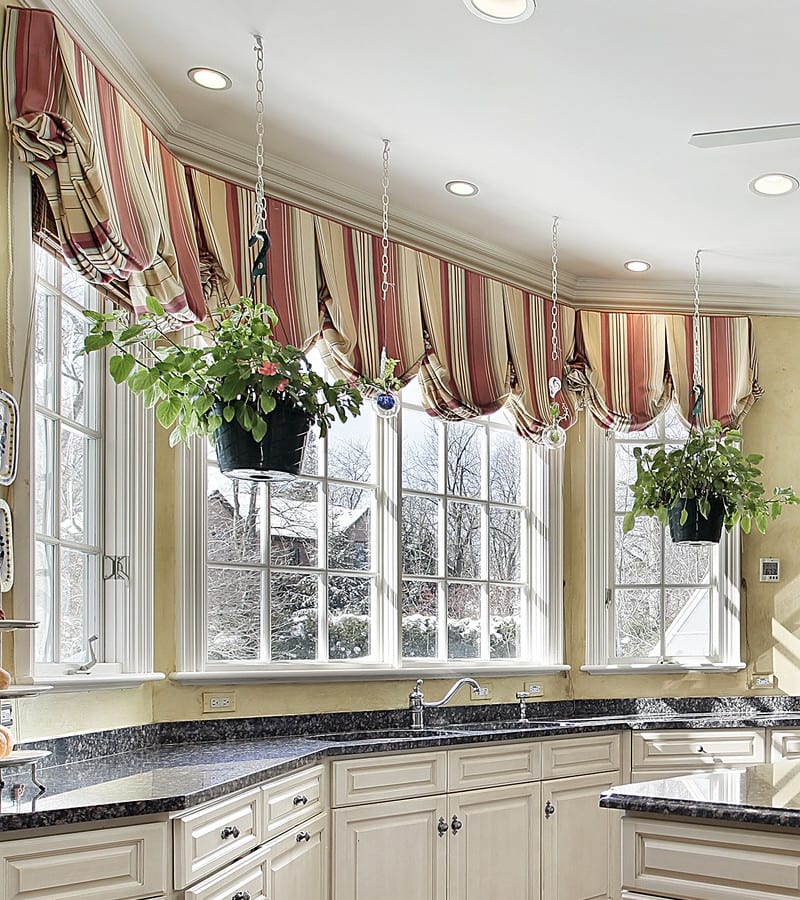 Custom balloon shades are also great on seemingly complicated bay windows. In a similar fashion, a traditional kitchen needed to dress multiple windows above its sink. The balloon shade was chosen here as well.

PROS OF A BALLOON SHADE:

CONS OF A BALLOON SHADE:

Now that I take a look at all the ideas we’ve seen so far, it’s clear just how versatile a fabric shade can really be. I started by introducing a fabric shade as one of the most modern window treatments that are available, yet I ended the post by showing you balloon shades in traditional kitchens and bathrooms. It goes to show you how a fabric shade can work around a specific design in a room just by deliberately selecting a style and fabric.

So, have you used a fabric shade in your room recently? Which of these styles did you choose? And what made you say “This is the one!” to the fabric you picked after you saw the endless choices in the fabric store?